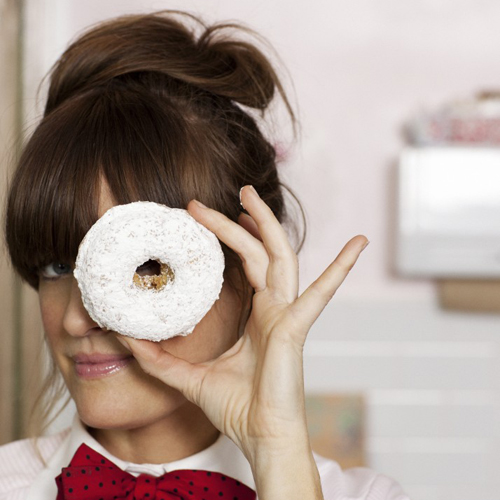 0 seats left
Menu
Waffles – Chocolate Chip Cookies from Scratch – Cupcakes
What you will learn
Join Erin McKenna, the owner and visionary behind New York’s beloved BabyCakes bakery, as she demonstrates the secrets behind an assortment of her favorite tasty treats from her newest book, BabyCakes Covers the Classics

In a city dominated by cupcakes overflowing with sugar, flour, and buttercream, it’s easy for those with persnickety diets to feel left out. BabyCakes offers all-natural, organic and delicious alternatives free from the common allergens: wheat, gluten, dairy, casein and eggs. Rest assured, all sweeteners are chosen responsibly and used sparingly. White sugar will never be found in their bakery, nor do they use chemical sweeteners. Instead, most products are sweetened with agave nectar—natural syrup from a cactus which is low on the glycemia index and often a safe alternative to most non-insulin dependent diabetics.

Erin McKenna is the chef and owner of the BabyCakes NYC, a bakery with outposts in New York City, Los Angeles and Orlando. Erin and her bakery have been featured in hundreds of media outlets, including the New York Times; O, The Oprah Magazine; Food & Wine; Harper's Bazaar; and InStyle, and she has been a guest on ABC's Good Morning America, the Food Network, and Martha Stewart Television. Erin’s first cookbook, BabyCakes: Vegan, Gluten-Free, and (Mostly) Sugar-Free Recipes from New York’s Most Talked-About Bakery (Clarkson Potter/Publishers; May 2009) shared her bakery favorites. Now she shares her fun childhood favorites in BabyCakes Covers the Classics (Clarkson Potter/Publishers; April 2011).