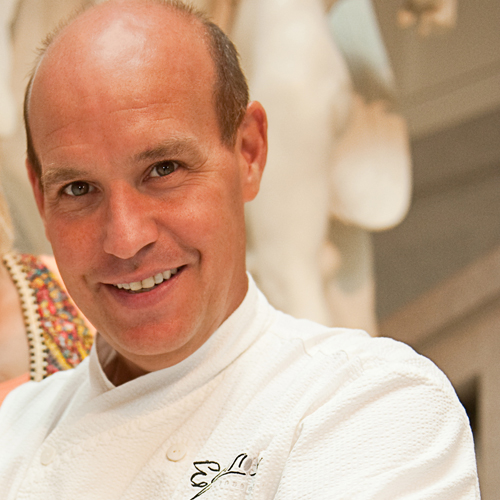 0 seats left
Menu
Baked Chincoteague Oysters with Pancetta and Gruyere - Fried Rappahannock Oysters with Truffle Mayo - Sandwich of Soft Shell Crabs with Gem Lettuce, Preserved Lemon Remoulade, and Old Bay Spiced Potato Chips - Pan-Roasted Rockfish with Lump Crab, Pecan Butter, and Grilled Asparagus - Shortcake with Marinated Blue Ridge Strawberries and White-Chocolate-and-Vanilla Cream
What you will learn
We are so pleased to welcome Chef Todd Gray of Equinox to the Sur La Table kitchen. In this special demonstration-style class, Chef Gray will focus on the Mid-Atlantic "trinity"—oysters, crab, and rockfish. As you enjoy dinner, he'll talk to guests and answer questions about all the amazing food that comes from the Chesapeake region.

We’ll start with a duo of oysters: baked Chincoteagues with pancetta and Gruyere, and fried Rappahannocks with truffle mayo. Then we'll move on to a sandwich of soft shell crabs with gem lettuce, preserved lemon remoulade, and Old Bay-spiced potato chips. As the final dinner course, we'll dive into a plate of pan-roasted rockfish with lump crab, finished with pecan butter and grilled asparagus. Chef Gray will end the evening with shortcake covered in marinated Blue Ridge strawberries and white-chocolate-and-vanilla cream.

Reserve your space now for this very special class. Seats are limited.

Chef Bio: From the seasonally inspired dishes he creates every day, to the numerous charities he has supported over the years, to his undeniable influence on the city’s palate, Chef Todd Gray’s impact on Washington, D.C.’s culinary scene is immeasurable. Many of the top toques in the nation’s capital have been shaped under his calm and patient tutelage.

His background in classical French and Italian techniques, proclivity for invention, and unflappable kitchen leadership have made Chef Gray a sought-after culinary mentor and an influential leader in the world of D.C. gastronomy. A longtime advocate for sustainable agriculture, he has worked tirelessly with local farmers to develop fresh, organic produce and other ingredients for his kitchen, including custom-grown beef.

Chef Gray has earned numerous awards for his kitchen artistry and inspired menu combinations, and in 2011, after eight nominations, he was named the Restaurant Association of Metropolitan Washington’s 2011 RAMMY Chef of the Year. He has also received five nominations for the James Beard Foundation’s Best Chef, Mid-Atlantic Award.

Raised in Virginia, Chef Gray studied at the University of Richmond and graduated with honors from the Culinary Institute of America. After the CIA, he worked at a number of fine dining restaurants, where he was able hone his craft, refine his technique, and develop his kitchen philosophy prior to launching Equinox.
Images