Skip to main content
Black Friday Deals up to 65% off. Shop Now.   X 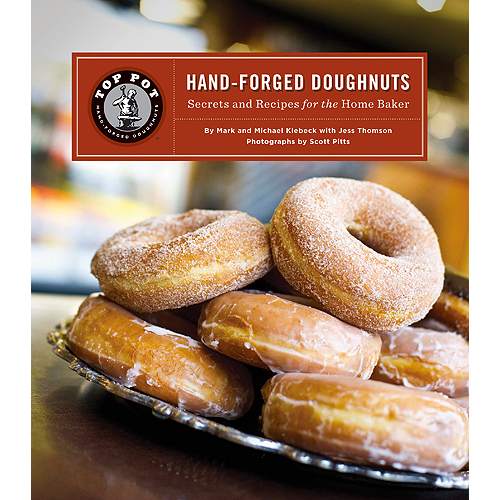 0 seats left
Menu
Doughnut Bread Pudding - Raised Glazed Ring Doughnuts – Top Pot’s Vanilla Doughnut Glaze - Double Trouble Doughnuts
What you will learn
Since emerging as one of Seattle's best doughnut companies a decade ago, Top Pot Doughnuts has become synonymous with doughnut perfection. Now, with the release of their first cookbook, the owners have made their confections accessible to the home cook. Join owner Mark Klebeck and co-author Jess Thomson for a class that teaches doughnut-making basics, plus covers information on frying techniques, baking with alternative ingredients, and on Top Pot's unique history and New York future. They'll demonstrate both cake and yeast-raised doughnuts, and also share their recipe for the ultimate bread pudding.

Mark Klebeck A native of Tacoma, Washington, Mark Klebeck left the University of Washington before his senior year to pursue a passion for building and remodeling. Barely passing high school woodshop, Mark became a self-taught cabinet maker who along with his brother Michael founded, designed and built the original Top Pot cafes. The two approached doughnut making with the same passion and attention to detail as in building their cafés- hence their slogan: Top Pot Hand-Forged Doughnuts. To date, Top Pot Doughnuts and Coffee can be found throughout the Pacific Northwest in a dozen company-operated cafes and QFC grocery stores. Top Pot is the official coffee and doughnuts of The Seattle Seahawks, Seattle Sounders FC, and CenturyLink Field.

Mark and Top Pot have been featured on Rachael Ray’s Tasty Travels, The Travel Channel, Food Network, The Cooking Channel, CNBC and magazines such as Fortune, Food & Wine and Saveur. He resides in Seattle, Washington with his wife and two sons.

Jess Thomson is a Seattle-based freelance writer and cookbook author. Her work appears in publications like Sunset, Cooking Light, and Edible Seattle magazines. She is a contributor at Leite’s Culinaria, where her work was chosen for inclusion in Best Food Writing 2008 and 2010. She won the 2012 MFK Fisher Award for Culinary Writing. Jess, a graduate of Middlebury College and The Cambridge School of Culinary Arts, is the author of the food blog hogwash, where she pairs food and life. Her first cookbook, Top Pot Hand Forged Doughnuts: Secrets and Recipes for the Home Baker, was published in September 2011 by Chronicle Books. Her second, Pike Place Market Recipes (Sasquatch, May 2012), will be followed soon by Dishing Up Washington (Storey, Oct. 2012).

Top Pot: What’s in a name?
It started with a sign. In 1996, a few years after they'd opened a coffee shop in Seattle, Mark and Michael found a giant neon sign that read “TOPSPOT.” They bought it for $400 and stored it in their mother’s backyard for 5 years. In 2000, Michael found a great deal on some used doughnut-making equipment so they decided to open a new coffee and doughnut shop, and to call it Topspot, fronted with the rickety old neon sign. However, they day they drove the sign down to the new shop, there was a rattle and a clunk as the rusty “S” fell off the sign. They replaced the S with a coffee pot, and Top Pot Doughnuts was born.
Images